What is a Gigaton?

Spring Free EV is on a mission to reduce CO2 emissions by one gigaton by making it easier to get more electric cars on the road. That sounds great, but what does it really mean to eliminate a gigaton of emissions?

When scientists talk about climate, they typically measure the causes and effects in planet sized units known as the gigaton, sometimes spelling it gigatonne. While this giga-ntic number is appropriate for planets, for people it is a measurement that is seldom encountered in real life and can be impossibly large to imagine accurately.

Adopted into the International System of Units in 1960, the prefix giga means one billion. Just like gigawatt represents a billion watts, a gigaton equals a billion metric tons.

Is a Gigaton a Measurement of Weight or Energy?

Technically speaking, a gigaton is a metric unit of mass, equal to 1 billion metric tons, 1 trillion kilograms, or 1 quadrillion grams.

However, particularly across planetary science, it is commonly referred to as a metaphor for energy, deriving that value from the amount of energy released by igniting a gigaton of TNT. For instance, an earthquake measuring an 8.0 on the Richter scale releases the equivalent of approximately 1.01 gigatons of TNT. This makes sense because an earthquake has no specific mass, but can be calculated to understand its energy.

When discussing the melting of the polar ice caps or carbon emissions, scientists are typically talking in terms of mass. According to NASA, satellite data shows that Greenland and Antarctica are losing mass at a rate of 283 gigatonnes per year and 145 gigatonnes per year, respectively. Contributing to this are greenhouse gases like carbon dioxide, which globally we emit approximately 40 gigatons per year.

How Much Damage Does 1 Gigaton of Carbon Emissions Do?

Global sea levels have risen by about 8 inches since 1901. An estimated 49,000 gigatonnes of ice melted during that time frame—enough ice to cover the entire contiguous U.S. in an ice sheet 22 feet high, or encase the entire moon’s surface in a 5-foot-high ice crust. In that timeframe, the earth’s average surface air temperature has increased by about 1 °C (1.8 °F), with over half of the increase occurring since the mid-1970s. 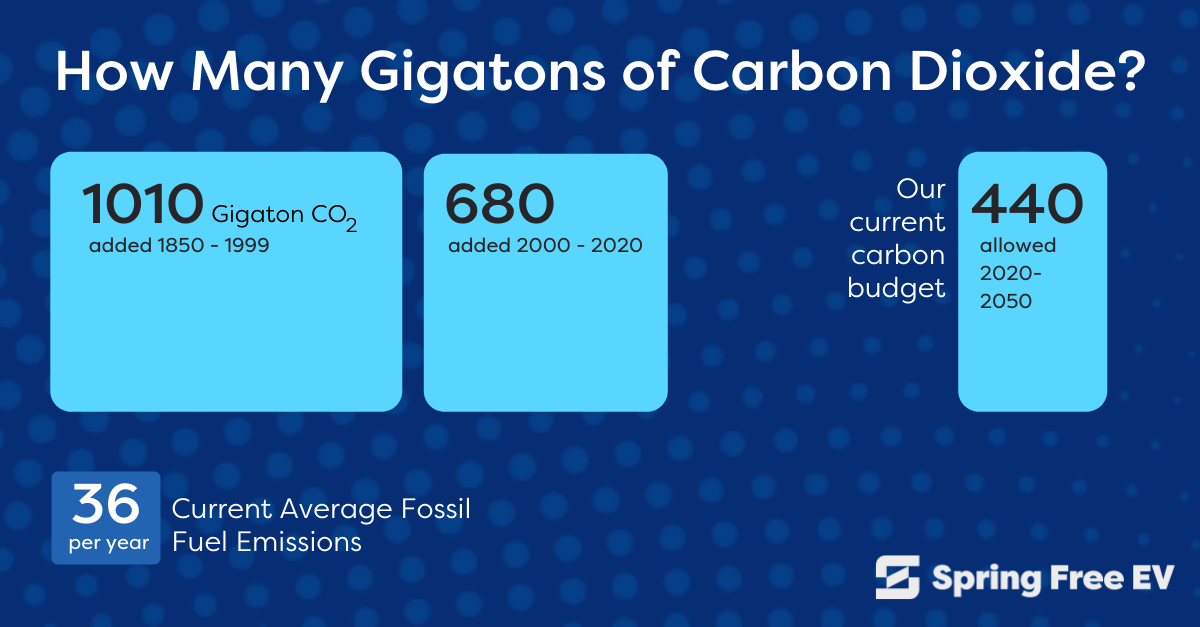 Recognizing the scope of the issue, more than 190 countries have signed the Paris Agreement designed to limit global warming this century to 1.5 degrees Celsius. Their goal is to reduce emissions creating new greenhouse gasses, as well as removing emissions. It said countries will need to remove a gigaton of CO2 from the atmosphere by 2025, if the climate change agreement target is to be met, and more than one gigaton annually thereafter. This is tricky business, as less than 10,000 tons (that’s .00001 gigatons) has been removed to date. “Without action to deliver 1 Gigatonne (Gt) of negative emissions globally by 2025, keeping global warming within the Paris Agreement target of 1.5°C cannot be achieved,” said the report by the Coalition for Negative Emissions (CNE), and consultancy firm McKinsey.

Spring Free EV has a bold mission to reduce climate change. Join us!

We’re on a mission to reduce C02 emissions by one gigaton through a new approach to vehicle financing that unlocks electric vehicle access for everyone. Join us to power a powerful new movement!

Spring Free EV removes the single biggest barrier to EV adoption, by making the costs equal to or lower than fossil-fuel vehicles and unlike existing options, the MPA is designed for high mileage drivers.

Business Insider Recognizes Co-Founder and Head of Sales and BD, Visrin Vichit-Vadakan, as a Rising Star in the EV Industry